At the beginning of February Latvia will host one of the hottest winter sports events of this year — the 2nd round of the FIA European Rally Championship; it will gather the European rally sportsmen elite and will be broadcasted on the TV in 59 states around the world. In order to prove that auto sports, especially rally, is very popular sport in Latvia and that organization of the round of the FIA European Rally Championship exactly in Latvia is not coincidence, but logical outcome, the rally organizers have announced the social campaign „Let’s go to rally!", and all Latvian rally fans are invited to participate in it. 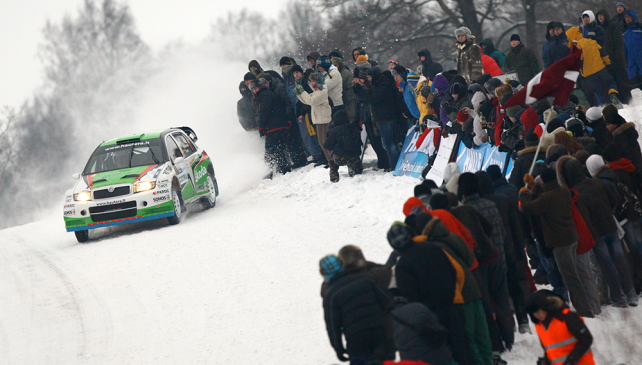 “With this campaign we would like to address all inhabitants of Latvia and rally fans to prove that our fans indeed are the best and the most enthusiastic ones, that cannot be found anywhere else,” says the leader of “Rally Liepāja-Ventspils” organizers’ team Raimonds Strokšs. During the campaign anybody is invited to be creative and to submit photos with themselves and things and persons, without which rally viewing is unimaginable. The submitted photos will be used for creation of the picture album of rally fans.

The photos are to be sent to the e-mail fans@lvrally.com or added to your post in the social network Twitter with a message “Lets go to @LVRally”. After receipt the photos will be selected and their compliance with the moral and ethical norms of the society will be checked, as well as it will be verified whether the photos are not insulting and can be used for public information purposes. If your photo corresponds to the requirements, it will be posted in the home page of “Rally Liepāja-Ventspils”, as well as in the social network Facebook facebook.com/lvrally, where everybody will be able see themselves and other rally fans. Everybody having submitted the photos till 4th February will participate in the lottery of a surprise prize. The most witty and interesting photos will be offered for valuation in the social network Facebook, and the winner will be established by the viewers vote.

We invite you to take part and to become one of the participants of “Rally Liepāja-Ventspils” fan movement. Let’s go to rally!

By submitting the photos you agree that the right of use is transferred to the organizers of “Rally Liepāja-Ventspils” — the Association “RA Motosport” — and that such photos can be used for promotional purposes. “Rally Liepāja-Ventspils” organizers do not guarantee that all photos submitted will be used during the social campaign “Let’s Go to Rally”.

You are kindly advised not to submit photos in conflict with the ethical norms and/or law.

Everybody having submitted the photos till 4th February 2013 will participate in the lottery of the surprise prize.