The FIA European Rally Championship touched down in Latvia last week for the first running of Rally Liepāja-Ventspils. Here are five things we loved about the winter event.

As if we needed reminding, François Delecour is a rallying legend. On Friday’s third stage he proved why when he completed much of the run with his driver’s door open after the locking mechanism broke prior to the stage start. It wasn’t such a problem on left-handers but every time the 50-year-old turned right he had to resort to driving one-handed in an attempt to hold the door shut. Incredibly he was second quickest.

Craig Breen’s pace has never been in doubt, but the now 23-year-old Irishman (he celebrated his birthday on the second day of the rally) once again impressed by leading for five stages on his ERC debut. Then there was Stéphane Lefebvre who’d never driven on snow and ice before but still set the pace in the ERC 2WD Championship before a mechanical fault dropped the 20-year-old to second.

They don’t come much more heroic than Alexey Lukyanuk, who punched above his weight onboard a standard-specification Mitsubishi Lancer, running as high as third overall only to retire two stages from home when he damaged his car’s oil cooler striking a snow bank.

Wherever you went on Rally Liepāja-Ventspils you could always expect a friendly welcome. The organisation and attention to detail was also first class.

Organisers devised route containing some truly stunning roads which proved to be a driver’s dream. For the final stage, they come up with something for the fans, a stage based around an artificial ski slope in Ventspils located within easy access of the city centre (pictured). 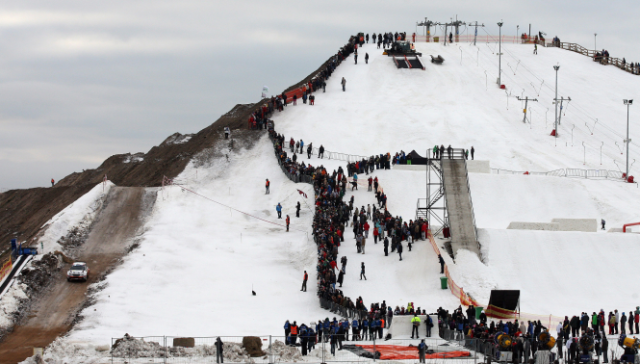