After three days of fierce competition and 15 stages on the Sunday afternoon in Ventspils the 2nd round of the FIA European Rally Championship the Rally Liepāja-Ventspils came to conclusion. 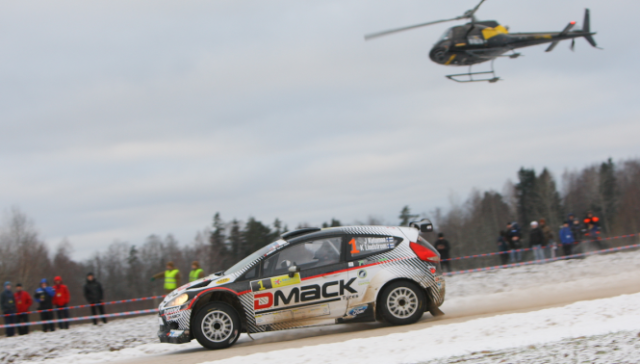 After the compliance to the convincingly and persistently driving Irish sportsmen Craig Breen/Dave Moynihan (Peugeot 207 S2000) in the first five stages of the Rally Liepāja-Ventspils on Saturday the race for victory in the FIA European Rally Championship round was started and during the following stages continued by the Finnish duet Jari Ketomaa/Kaj Lindström (Ford Focus RRC). The determined northerners reached their aim with certainty showing the best time in 8 of 15 stages.

In the press conference after the rally finish Ketomaa revealed that initially it was hard to get used to the car, however with each kilometer covered his confidence and driving speed increased that at the end gave him 31.0 seconds in front of Breen and victory in the Finnish sportsman’s first start in the FIA European Rally Championship round.

The third in the Rally Liepāja-Ventspils was the experienced French sportsman Francois Delecour with his co-driver Dominique Savignoni (Peugeot 207 S2000). After the race Delecour revealed that to great extent he has been deceived by unsuccessful choice of a gearbox — it had short gears unsuitable for the specifics and track configuration of the Courland rally that considerably influenced the Frenchman’s possibility to reach the necessary speed; he managed only 161 km/h, however his rivals speeded along the winding gravel roads with 200 and even more km/h. Anyway, Delecour with the margin of 2 minutes and 47.5 seconds behind Ketomaa’s result managed to remain in the 3rd position.

The 4th place was won by the skilled Czech driver Jan Černý and his co-driver Pavel Kohout (Škoda Fabia S2000) losing to Delecour only 15.9 seconds, but the 5th place was taken by the fastest Latvian crew of Raimonds Kisiels/Arnis Ronis (MINI Countryman JCW RRC). They covered the stage distance of 243 km in 2 hours 14 minutes and 2 seconds and lost to the leader 5 minutes and 46.3 seconds.

After the conclusion of the Rally Liepāja-Ventspils ERC General Co-ordinator Jean Pierre Nicolas together with the Eurosport representative Gilbert Roy and Jimmy – the father of the deceased British sportsman Colin McRae — chose the sportsman, whose performance best characterized Colin’s performance once seen in tracks. Initially they chose two sportsmen — the 20-year-old Frenchman Stephane Lefebvre (Peugeot 208 R2) and the Russian Alexey Lukyanuk (Mitsubishi Lancer EVO X); Nicolas, Roy and McRae awarded the Colin McRae’s Special Prize to Lukyanuk, which the day before became the winner of the round one of the Latvian Rally Championship.

In the competition between one-axle drive cars the fastest driver in the total valuation of the Rally Liepāja-Ventspils was the Finn Risto Immonen with his co-driver Mikko Lukka (Citroen C2R2 MAX), Stephane Lefebvre with Thomas Dubois (Peugeot 208 R2) was the second, but the 3rd place was won by the Latvian Ralfs Sirmacis/Māris Kulšs (Ford Fiesta R2).

Simultaneously with the 2nd round of the FIA ERC along the roads of the Liepāja, Ventspils and Kuldīga neighborhood, also the first two rounds of the Latvian Rally Championship were held. In the set-off of the 1st round winners were established in nine stages of the first and the second day, and the fastest was Alexey Lukyanuk from Russia. In the rally total valuation in fierce competition about the highest step on the podium he outpaced the Estonian Siim Plangi and the Latvian Mārtiņš Svilis. In the one-axle drive set-off the fastest were three Ford Fiesta R2 pilots — Ralfs Sirmacis, Emīls Blūms and Nauris Bruņinieks.

The results and the winners of the Latvian Rally Championship round two were established in six Sunday stages of the Rally Liepāja-Ventspils. In these six stages the sportsmen had to cover slightly more than 109 km, and the fastest were Jānis Feldmanis/Anrijs Jesse (Mitsubishi Lancer Evo X). With the margin of 17.5 seconds behind them the second in the LRC round two total valuation was Vasily Gryazin with his co-driver Dmitry Chumak (Mitsubishi Lancer EVO X) starting with the Latvian LAF licence; Mārtiņš Svilis/Ivo Pūķis (Mitsubishi Lancer EVO VIII) took the 3rd position for the second time in two days time.