For participation in the FIA European Rally Championship Round „Rally Liepāja-Ventspils” 79 crews have submitted their applications representing 17 countries. The application for participation in this round has been submitted also by the legendary French driver Francois Delecour — he will start with the Peugeot 207 S2000 car. The sportsmen along the snowy roads of Kurzeme with the total length of 243 km will compete for victory in the 2nd round of the FIA European Rally Championship (ERC). 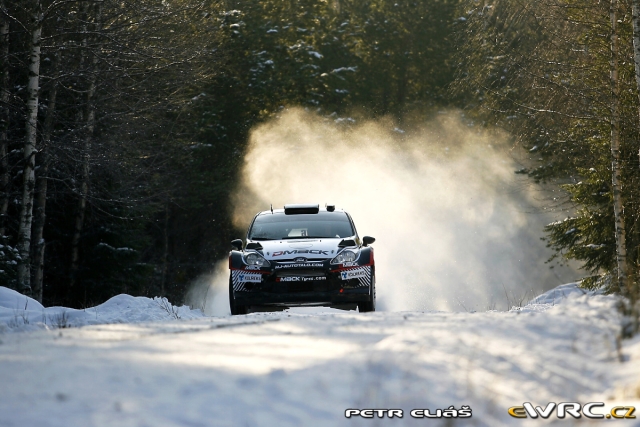 The total number of crews having submitted their applications for participation in the 2nd round of the ERC that from 1st till 3rd February will be held between Liepāja and Ventspils is 42, and 8 of them will start in the strongest class with the S2000 group cars. The main favourites of the race are the above mentioned French and the well-known Finn in Latvia Jari Ketomaa, who will start in the Rally with the Ford Fiesta RRC car. Competition between the favourites will be made even fiercer by two Czech sportsmen — Antonin Tlusak and Jan Černý, piloting Škoda Fabia S2000 cars, as well as the local sportsmen Raimonds Kisiles, who has applied with the car unseen in Latvia so far — Mini JCW RRC. In the strongest group with Škoda Fabia S2000 will start also the Hungarian János Puskádi. In the Rally Liepāja-Ventspils it will be possible to see another two Peugeot S2000 cars piloted by the Irish Craig Breenand the French Jean-Michel Raoux.

„Seeing the motorsports legend Francois Deleceur driving in rally is the same as seeing Wayne Gretzky playing hockey again,” the list of participants is enthusiastically commented by the Rally Liepāja-Ventspils organizer Raimonds Strokšs. „It is a great pleasure that already in the first rally organization year we have managed to rouse interest in so many participants. Flags of seventeen countries by the start trestle is a great beginning to ensure that the name of Latvia will be head far beyond its borders not only this year, but also in future.”

The legendary French driver Francois Delecour during his career has participated in 97 WRC rounds and has won four of them. The French pilot Francois Delecour reached the highest point in his career in 1993, when starting with Ford Escort RS Cosworth car he was only two points behind the title of the World Rally Champion. Currently despite the age of 50 Francois continues active participation in races and concluded the year 2012 with the title of the Champion of Rumania. Francois Delecour will start in Latvia with Peugeot 207 S2000 car and will try to improve the result achieved in the 1st ERC round in Austria, where he and the steersman Dominique Savignoni finished in the 7th position.

The Rally Liepāja-Ventspils will mark also the beginning of the Latvian Rally Championship season 2013 with one start as in three rally days first two rounds of the Cahmpionship will be covered. Participation in the Latvian Rally Championship has been announced by 48 crews and it is expected that for victory in the prestigious N4 class will compete the Vice-Champion 2012 Jānis Vorobjovs/Guntars Zicāns and Aivis Egle/Andis Dauga. Both crews will start with the Mitsubishi Evo X cars. In the fight for victory will participate also the sportsmen from the neighboring countries — the Lithuanian Vytautas Švedas (Mitsubishi Evo X), the Estonian Siim Plangi (Evo X) and the Russian Alexey Lukyanyk (Mitsubishi Evo X).

The list of participants is available in the Rally Liepāja-Ventspils home page: http://www.lvrally.com/eng/rally/competitors