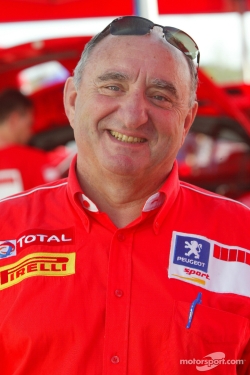 This also means that active supervision and control is carried out by the organizer of the championship — the Eurosport Events. Last week Latvia was visited and the stages of the Rally Liepāja-Ventspils were inspected by the ERC General co-coordinator Jean-Pierre Nicolas.

Jean-Pierre Nicolass is a well-known rally specialist. At the beginning of his rally career — in the 1970s — he as a pilot represented the Alpine Renault and Peugeot team in the World Rally Championship (WRC) and in five rallies reached the highest step of the pedestal of honor. After the end of the active autosports career he devoted himself to the managerial work and managed the team of the French automobile manufacturer Peugeot with such rally stars as the Englishman Richard Burns, the Frenchman Gilles Panizzi and the Finn Marcus Grönholm, who both for the team and himself won two titles of the world champion. After the French automobile manufacturer left the WRC, Jean-Pierre Nicolas joined the organizers of the Intercontinental Rally Challenge and became the Development Manager of these rally series. Nicolas kept post also in the newly-established ERC.

After returning from the stages of the Rally Liepāja-Ventspils, Jean-Pierre Nicolas gave an exclusive interview to the portal Delfi.

Considering the takeover of the ERC by Eurosport Events, what is the current situation?

We had to start with hard and serious work — with rally selection. You can count yourself — the IRC had 13 rounds, the previous version of the ERC — 12 rounds, which means 25 events in total. If new rallies, like the Latvian rally, are added, the total number is almost 30. Many of these rallies are very famous with decades of rally organization and hosting experience; however we had to leave only 13 rounds. This is done, and now we are visiting the host countries and monitoring work that is carried out. Besides, there still are two free rounds in the next year’s calendar — three countries have applied for two gravel rallies, and the current negotiations with the organizers will determine the countries that will host the ERC round.

Isn’t it so that the ERC follows the previous path as according the division — eight asphalt rallies, four gravel rallies and one winter rally — teams can start with the idea “win the asphalt, skip the gravel?"

It is not exactly like that. There are eight asphalt rounds, six gravel rounds and one winter round, and thus the division is almost 50:50. It is important to keep this balance, as this makes the Championship event more interesting.

How organization of the Latvian Rally differs for example from the Cyprus Rally?

Can this cause any problems? As the average speed suggested by FIA is not higher than 120 km/h…

I think that the Rally Liepāja-Ventspils will not exceed this limit. I can say that several sections are very fast, but the average speed will be lower.

It seems that you are surprised about our roads…

This is the first time I visit Latvia, and what I saw pleasantly surprised me. There are several sections that are as good as the best Finnish roads.

What could be our main problem, except winter and snow?

Hm... Your organizing team is very young; however I hope that this will not be a problem. I saw that Raimonds (Raimonds Strokšs) works with great enthusiasm and energy. I know that his team is as responsible, and they receive major support, and thus we can look forward to a very good competition.

Cannot the fact that the Latvian Rally is the only winter rally become a disadvantage as special regulations, special tires and discs are needed for just one event, which is a financial drawback?

Yes, this is a very serious issue we are dealing with together with the International Automobile Federation (FIA). We are looking for solutions to decrease these costs, and one of the possibilities is to include in the calendar more than one winter rally, but in this case the other winter round is Jännerrallye in Austria on the asphalt roads. In any case we will take into consideration the situation in relation with the Rally Liepāja-Ventspils.

This means that we need more support and promotion form Eurosport Events!

Yes, your rally is the one I will personally invite to attend and participate in. It is worth it! Besides, I consider low costs as well — here the service of the Western Europe, including food and hotels, is offered for the price of the Eastern Europe, and it is not a negligible aspect.

You bestowed compliments also to the Austrian Round. Should we become jealous?

(Laughing) It is a very beautiful rally indeed, with great nature, vast and fast good-quality roads! However you shouldn’t worry, as the Rally Liepāja-Ventspils is completely different, but as great! Believe me, I have been in many places and have seen a lot throughout my life.

According to the envisaged plan of changes, in 2014 several WRC rounds could become available. Do we have any chances to remain in the ERC calendar, if we have to compete with such rallies as Monte Carlo or Rally Deutschland?

Currently I cannot comment on this question, as the changes in the WRC calendar are not known yet.

Will you attend the Rally on 1–3 February?

Definitely! I will attend all ERC rounds!